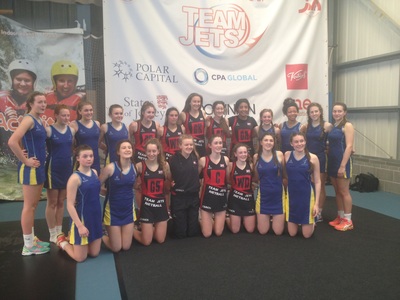 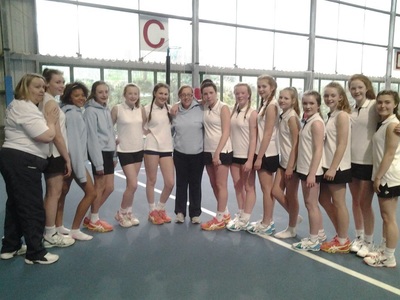 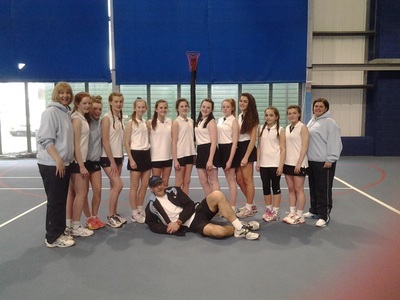 March saw 34 selected athletes from the County Satellite and Academy squads head of to Jersey for a weekend of netball. Arranged by academy assistant coach Phil Owen, we liaised with the Jersey NDO Chrissy Bannerham after a chance conversation between her and County Chair via Facebook (the wonders of social media).

After a coach trip to Southampton and short flight to Jersey, we dropped our gear off at the hotel and headed straight out for an evening of Bowling and Pizza, noting that coach Phil did have a couple of sneaky goes!

Saturday started with a short coach trip to the venue and the U16’s matching up on a wonderful court against  Jersey U16 academy. A good fast game with Cheshire coming out on top. Head coach Chris Brien with assistant Mel Morris were pleased with the performance generally getting all the girls on court – always things to work on though.

Next up, we all watched the EN Prem game between Seniors Jersey Jets and Linden, coached by England Assistance Coach Collette Thompson. An exciting game with Jersey just getting ahead in the final quarter watched by a couple of hundred spectators.

The afternoon was jam packed too with the 2 U14 teams playing a couple of games against two club teams, one team lead by U14 Coach Sue Day assisted by Elaine Metcalfe and the other lead by Nikki Kendrick and assisted by Jenny Bignall and Phil Owen, whilst the U16’s took on a Jersey select club team. Difficult for the girls to get back on track at first after the gap between games but finished easily on top at the end of the hour. The U14’s won both their games easily ensuring all the players got onto court.

Saturday evening was a relaxing one after a lovely meal with Phil hosting a quiz master – we all learnt something new!

Sunday was a busy day starting with a walk through Jersey to the sister hotel, where the players were treated to a go on a Wave Rider as well as access to a pool, slide, Jacuzzi and steam room. Chris took charge as camera man with some of the most challenging part of the trip being getting and out of a wetsuit. County Chair and tour umpire Estelle Graham had to have a go of course and did the best wipe out of the day!

The bus then picked the group and back to the venue we went for the toughest challenge of the weekend. The U14 teams played the Jersey U14 Regional club winners who have qualified via the South West region to the National Clubs. Very close games from both teams but Cheshire wins. And the final game was Cheshire’s U16 against a Jersey U19 team. Down for 3 quarters, the Cheshire academy athletes dug in and brought home the win.

An excellent weekend with lots learnt by both the coaches and the athletes, friendships grown and a few blisters created. Well done to all those involved.